Messi Vs Ronaldo: Legends for Whose Side?

0 0 K.D Tuesday, 31 March 2020 Edit this post
The legend of world football and legend Brazilian Pele conceded that Portugal's Cristiano Ronaldo was better than Argentina's Lionel Messi in modern football a week ago.

The last time the debate about who is the best in Messi Ronaldo is in world football. But, everyone has their own opinion. It is difficult to determine who is the best. For the past decade, these two players have been proving themselves obsolete. In the last 12 years, these two players have proven themselves by winning the Ballon Dior 11 times. These two have no title to win club football.

Ronaldo has earned Portugal the Eurocup title in his time. Messi won all the titles for Barcelona, but he did not win Argentina in his time. Messi, who missed the Copa America Cup twice, also lost the World Cup final in 2014.

When Pele's perception came out, Dailymail understood the opinions of other football legends. 'I think he is the best. He's very smart. But, let's not forget Messi. He is not just a forward, ”Pele said in an interview. Ronaldo as Messi. Here is their opinion.

The Argentine Maradona is likened to a similar level player with Pele. Maradona also stands in Messi's and Ronaldo's arguments. 'Messi has played in my training. But, he didn't play there as I thought. I surprised myself. I don't want to miss it. But Messi is the best player in the world, "Maradona said. Ronaldo is also excellent in his place. Messi will surely be remembered by football history. Football has given him everything. As much as he has given the game. Now he has won only one World Cup. All her stains will be erased. '


Paul Scholes is one of England's talented players. These talented players saw Cristiano Ronaldo prove himself at Manchester United. However, he surprisingly says that Ronaldo and Messi are two of the best football players in modern football. 'Messi is the best. But, Ronaldo is superb, 'said Scholes,' Ronaldo is sharp in pace and power. He would score. Rounding on Freak. However, Messi is the form of an all-rounder footballer. He's full of everything.

'There is a similarity in their technical ability and talent. It is a matter of pride to attend both football at one time. But Messi is one of the best players in the world, "Beckham said. It is unlikely that Messi is not in this world. And he's like Ronaldo. Which is not at his level. They're both up.

Brazilian legend Roberta Carles is well aware of what a football superstar looks like. Because in his 24-year business career, he had the opportunity to play with Brazilian legend players such as Ronaldinho, Ronaldo Nazario and Romario. Carlos, the former fullback of Spanish club Real Madrid, has said that Ronaldo is better than Messi at the moment.

'I watch Ronaldo's training every day. His way of training is different and exciting. He wants to improve himself day-to-day, 'said Carless,' Messi is an unexpected event. Nature has given her everything. However, Ronaldo's training, professionalism, focus, motivation and success have set him apart.

Sir Alex Ferguson of Scottsdale is regarded as one of the greatest trainers in the world. Ferguson (1986–2013) coached the English club Manchester United for 27 years. The same coach trained the Portuguese, Cristiano Ronaldo, one of modern football's celebrities. Ferguson is said to have an important role in making Ronaldo a round machine.

Ferguson has chosen Ronaldo and his own disciple Ronaldo in Messi. 'Don't get me wrong now. Messi is a good player. But, my opinion is different. Messi is a Barcelona player. Ronaldo played for Stockport County. Completed the hat-trick. Because he wants to be different. He is not a great player in the world, "said Ferguson.

Three-time Ballon d'Or winner Legende Marca van Wasten of the Netherlands claims Messi is the epitome of modern football. 'Ronaldo is a great player. But those who say he is better than Messi question his football knowledge, 'said Van Wasten,' who is saying that. They don't know football. They have said in bad faith. Messi is different. It is impossible to duplicate and replicate her. Players like him come in between 50 and 100 years old.

France legend and Spanish club Real Madrid coach Zinedine Zidane is a successful player to leave a mark on world football before retiring from football in 2006. Messi and Ronaldo have begun to dominate world football only after the departure of a generation of players like Brazilian Ronaldo, Ronaldinho, Romario and Roberta Carles. He is the coach of the Champions League winning a hat-trick.

The coach, Zidane, has chosen the Portuguese Ronaldo in his selection. He also said that Ronaldo without real and that he would not achieve such a huge success. 'Cristiano Ronaldo is the best player. His opponent is Messi. And this competition is something everyone wants to see. However, Ronaldo is a tremendous player. There is no word to describe him, 'Zidane said,' even though I have a good career, I am a much higher level player. He is still a great player. Again, Messi is his opponent.


France's young forward Kylian Mbappe is seen as the successor to Messi and Ronaldo's departure from world football. They have already reached that level. He has won a World Cup. However, modern football figures Ronaldo and Messi have not won the World Cup.

Excluding Mbappe in all the important debates will feel a little silly. Mbappe has chosen Ronaldo over Messi and Ronaldo. 'Ronaldo is my idol. I've been playing under Ronaldo since I was a kid. I started to love Ronaldo from a young age, "said Mbappe. '

Veteran Swedish forward Zlatan Ibrahimovic, who is still in the business game, has spent two decades playing in the professional game. Ibrahimovic said Lionel Messi of the Spanish club Barcelona is a great player of modern football.

'I think Messi is a different kind of player. What is he doing I don't know If we talk about another player, that is Ronaldo, "said Ibrahimovic." Ronaldo is a hard-working player. She is diligent It's not natural.

'I love playing with Messi. I didn't play with him for long. He was in his youth when I left Barcelona. I want to play with him once again, '' said Ronaldinho, adding that he is undoubtedly a player in history. No one did what Messi did. Another Ronaldo is a complete player. But, I prefer Messi's style.

Brazilian legend Ronaldo Nazario says Messi and Ronaldo have made a unique identity in the world football market. Their popularity has also said that private companies want to invest in soccer. Ronaldo, who played from Spanish clubs Barcelona and Real Madrid, said both players have excelled in modern football.

'To some extent Messi is excellent. She's out of this world. Ronaldo too. But, I see Leo a little more, "said Ronaldo. Ronaldo is also great. I like him more than any other player. Everything he does is spectacular.

But when choosing these instructors, Ronaldo and Messi, he gave a strange answer. 'I have only one selfie on my smart phone. That is with Messi. Ronaldo was in the same room, 'said Klopp.

Argentina and Spanish club Atletico Madrid coach Diego Simoni said Messi is the best player in Ronaldo and Messi. 'I'll pick Messi from my country. But, Ronaldo is also a great player. But, I will pick Messi, 'said Simoni,' if you have the desire to contract a normal player for the general club, there will be a fit with Ronaldo. But where Messi is, there will be other players like him. Messi is one of the best players in the game. Messi is Better than Ronaldo.

Former England and Spanish club Real Madrid coach Favio Capello did not get a chance to work with Ronaldo and Messi. However, these coaches say Messi is somewhat superior to Ronaldo, even though both players are of the same level. 'Ronaldo is an extraordinary footballer. But, Messi is a talented player. There are three talents in football. 'Pele, Maradona and Messi,' Capello said, 'in the meantime, Ronaldo also stands out as an exceptional player. She tries to win everything. But Messi is a talented and good player.

In the poll of 14 legends, only 10 stood in favor of Messi and 4 in favor of Ronaldo. But understanding all this, it can be said that both of them are excellent in their place. Ronaldo is excellent in his hard work. Messi has received the gift of nature. They are both in the latter half of business sports life. Messi has won the Ballon d'Or six times and Ronaldo five times. Whatever the case, Messi and Ronaldo are the founders of modern football. This debate will never go away. 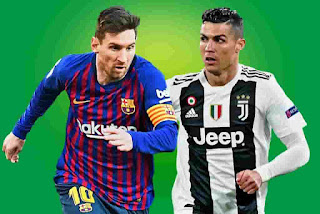