The 13th edition of the Indian Premier League (IPL) is currently underway in the United Arab Emirates (UAE). Nepalis are also following the league which is a gathering of world famous and star players. With the presence of an indigenous cricketer, Nepalis have an additional interest in the IPL.

Nepal's young star Sandeep Lamichhane is playing in the IPL for the third time in a row. However, Sandeep has not been included in the playing XI even after his team Delhi played three matches in the league stage. It is not possible to say whether he will get a chance in the upcoming games or not.

Will Delhi Capitals Include Sandeep Lamichhane Next Game?

Sandeep, who is often the first choice for the team in other leagues in the world, is on the bench in the opening game in the IPL. After all, why didn't Sandeep get to play?

Quota of foreign players in IPL

In the IPL, each team can have a maximum of 8 foreign players in their team. A maximum of four foreign players can be fielded at a time. Foreign players are placed on the playing set to balance the batting and bowling in the team.
There are 8 foreign players in Delhi too. Out of which only four players can play only once. In the first three matches, Delhi played South African fast bowlers Kangiso Rabada and Enrich Norkie along with Australian all-rounder Marcus Stoinis and West Indies batsman Shimron Heitmeyer.
Related:Arsenal beat City Reach FA Cup Final
Along with Sandeep, Australia's Alex Carey and Daniel Sams and West Indies all-rounder Kimo Paul are sitting on the bench watching the four players play regularly.
Stoinis and Norkia, who made their debut for Delhi, did well. Kagiso Rabada is bowling well in that too. He is indispensable to strengthen the fast bowling of the team. Since there is no Indian batsman in the lower order, foreign players are forced to play in the all-rounder quota. That is why Heitmeyer and Stoinis have the opportunity. Stoinis has proved himself since the first game, but Heitmeyer has not played well. He will have to play another foreign player instead of Heitmeyer or the Indian will need a good all-rounder.

Sandeep to be a leg spinner. There is no shortage of spinners in Delhi. Along with Amit Mishra, Ravichandran Ashwin, often veteran Indian spinners like Patel are in the Delhi team. As the most experienced and domestic player is a spinner, Delhi is playing an Indian spinner more than Sandeep.
In the first match, Ashwin played against Punjab. He was often accompanied by Patel. When Ashwin was injured in the first match, Sandeep's chances in Delhi increased. But when Delhi replaced veteran spinner Amit Mishra in Ashwin's place, Sandeep could not play. In the second and third games, Amit and Akshar played from Delhi.
The spin attack in Delhi is good. They are playing domestic players as much as possible. Both Ashwin and Mishra are experienced. When one does not play well, the other gets the opportunity. The third spinner can often even bat in the lower order. If Sandeep is played as a foreign spinner instead of an Indian spinner, Delhi will have to change to a fast bowler and play an Indian instead of a foreigner.

Delhi has some of the best fast bowlers in the world like Rabada. Norkey, who has a contract in Delhi this season, has also got the opportunity from the beginning. This means that the Indian fast bowler in Delhi looks weak. Due to which, Delhi has been playing two foreign fast bowlers from the very beginning.

When will Sandeep Lamichhane play?

Delhi were giving continuity to four foreigners till the third game. However, only Rabada and Stoinis have proved themselves. Rabada is bowling well. Stoinis is doing well on both bat and ball when needed.
Fast bowler Norkey and batsman Heitmeyer have not performed as well as expected. Heitmeyer, who is batting in the middle order, has not been able to repeat the performance of the CPL.
Sandeep's turn could come if Delhi make some changes in the batting order and make extensive changes to foreign players. In the previous match, only Rabada had done well among the foreign players when they lost to Hyderabad.
Related:Best Futsal Grounds in Valley
Similarly, Narkie and Amit Mishra's performance was not good. If Delhi wants to change these places, Sandeep may have a chance. Delhi will next play Kolkata Knight Riders on October 3 in Sharjah.
However, in the previous two editions, Sandeep had watched the opening games from the bench. In the first edition, he got a chance in 3 games after being eliminated from the Delhi competition. The Indian media also speculated that Sandeep could play from the first game in the IPL as he performed well in the West Indies league this time. But this did not prove to be true. 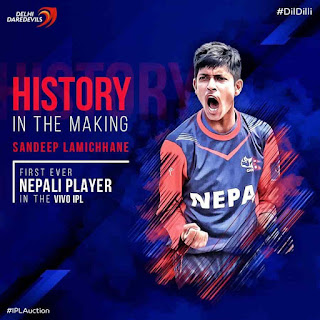