Whether it's a holiday or a Saturday holiday, many take it as a time to relax. And also the enjoyment of the movie on TV. With the recent improvement of Nepali films, the number of people watching Nepali movies is getting heavier day by day. In this article you can find must watch 12 Nepali movies youtube link. 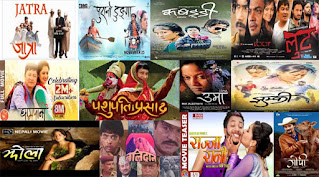 Youtube has made it even easier for those who have not reached the movie hall due to lack of time.

The movie "Ghampani" is currently being discussed among Nepali movie lovers. The movie is also in the news as the star cast of the movie is Dayahang Rai and Keki Adhikari. On top of that, the audience has already started humming the first song of the movie which was released a few days ago. The song composed by Kali Prasad Baskota has an arrangement by Almoda Rana Upreti. Ghampani is 1st movie in Must watch 12 Nepali Movies list.

The film, produced under the banner of Aryan Films, stars Nazir Hussain, Keki Adhikari, Kameshwor Chaurasia, Laxmi Wardeva, Sangita Napit, Arun Regmi and Deepak Chhetri in the lead roles. Ramesh MK Poudel has made the film based on the ethnic love story of West Terai. Deepak Sharma's music, Purushottam Pradhan's cinematography, Kaviraj Gahatraj's choreography are in the film. Rajja Rani is the 2nd movie in Must watch 12 Nepali Movies list.

Uma is a film worth watching during the conflict. Maoist guerrillas Uma (Richa Sharma) and Police Milan (Saugat Malla) are both in love with each other. Their mother (Mithila Sharma) is in Chepuwa of these two. If we connect Nepal with the suffering of Mithila Sharma, the condition of the country was similar to that of Mithila.

What sets it apart from other films made around the conflict period is that it is a feminist cinema. Richa Sharma is in a strong role in the war by carrying a gun. The film also stars Praveen Khatiwada, Pushkar Gurung, Dayahang Rai, Sirjana Subba and others. Uma is the 3rd movie in Must watch 12 Nepali Movies list.

Bipin Karki, who looks different in every movie, has worked hard to make the role of a cowherd suitable for him. Gopi tells the story of the efforts of a young man who wants to make a living by raising cows in Nepal by giving up his fascination with foreign countries. The situation of cattle breeding in Nepal, the milk market, the problems of farmers and consumers and even government policy have been touched upon. Gopi is the 4th movie in Must watch 12 Nepali Movies list.

Worth to Watch Top Movie from South Indian

Pashupati Prasad is a film shot in the temple environment like the name Pashupati Prasad, which shows the story of a young man's dream of disappearing from the village to the city. The story of the film is not only about the Pashupati area but also about the losses, jogis, old age and smuggling. Pashupati prasad is the 5th movie in Must watch 12 Nepali Movies list.


The triangular love story is drawn in the beautiful surroundings of Kabaddi Mustang. Hanthap between Kazi (Dayahang Rai) and Vivek (Saugat Mall) to seduce Mainya (Rishma Gurung) is the fun part of the film.

The story of the film connects the environment of Mustang with the Thakali tradition and local politics. Apart from the main character, the presence of actors like Vijay Baral and Buddhi Tamang in Kabaddi has also made the film interesting.

You can also watch 'Kabaddi Kabaddi' which can be found on YouTube. kabaddi is the 6th movie in Must watch 12 Nepali Movies list.

The movement of 2046 BS has a special significance in the political and social life of Nepal. Thousands of Nepalis sacrificed their lives to change the 30-year-old one-party Panchayat system. Balidan film is the story of those who risked their lives for the country and democracy.

The film is directed by Tulsi Ghimire and has a story full of political consciousness composed by Modnath Prashrit and composed by Ralphali Ramesh. Harivansh Acharya, Madan Krishna Shrestha, Anjana Shrestha, Nir Shah etc. have the main role in this. Balidan is the 7th movie in Must watch 12 Nepali Movies list.

Multistar loot including Saugat Malla, Dayahang Rai, Karma, Richa Sharma not only raised the dry market in Nepali films, but also changed the trend of the film. Loot became a representative film of the new generation of young generation.

The story of the robbery goes on with Haku Kale's attempt to complete the master plan to rob the bank. The role of Haku Kale played by Saugat Malla is one of the most memorable characters of Nepali film. Directed by Nischal Basnet, the film tells the story of unemployed urban youth and their criminal activities under pressure to make money. Loot, which is preferred for its presentation rather than story, is a film that has earned acclaim for its script, dialogue and acting. It beautifully captures the view from the streets of Kathmandu to the distillery.

Although not as powerful as Loot, watching its sequel 'Loot 2', which is based on the story of looting, can be fun during lockdown. Loot is the 8th movie in Must watch 12 Nepali Movies list.

The comedy film 'Laughing Therapy' can be made at this time of stress free living. Jatra is such a film.

The story of the jatra is simple. The story is about the characters' struggle to digest money after suddenly finding large sums of money. It depicts the different moods that arise in the minds of lower-middle class characters living in a lack of money when they get unexpected money.
Jatra is the 9th movie in 'Must watch 12 Nepali Movies list'.

Apil Bista's 'Debut' directed Jhumki. However, the presence of 'Star Value' actor Dayahang Rai, Bhola Raj Sapkota, director Rambabu Gurung and Nischal Basnet has made the film mature.
Police Gokul Bhatt (Manoj RC), who reached Tharu Basti in the Maoist-affected Midwest, has been accused of abusing his daughter. The villagers surround the police station. He is facing departmental action on the charge of 'defaming the police service at a sensitive time'.

After serving his sentence without any guilt, Gokul goes to his own district police officer asking for help. Coincidentally, he sees Devaki (Rishma Gurung). Devaki is charged with abuse. The police officer invites Gokul home the next day with reassurance. But, when he reached there, the police officer is killed. Jhumki is the 10th movie in 'Must watch 12 Nepali Movies list'.

Before 1977, it was considered a very difficult and anti-social act for a woman to be able to escape from her husband's grave while she was being burnt alive.

A decade ago, Krishna Dharabasi published a literary work titled 'Jhola' in a way that would make today's society realize the sati practice and the discrimination associated with it.

In an attempt to further establish the poignant question raised by the story, the film 'Jhola' has been made at this time. After the death of her husband, the wife had to burn her body along with her coffin.
Jhola is the 11th movie in 'Must watch 12 Nepali Movies list'.

Purano Dunga is a Nepali fictional and tragic film directed by Ram Babu Gurung and produced by Raunak Vikram Kandel, Prakash Gurung, Aom Chandra Runiyar and Dhan Bahadur Gurung. The film stars Dayahang Rai and Priyanka Karki in the lead roles as boyfriends, while Maotse Gurung and Menu Pradhan play the role of Dayahang Rai's brother and sister-in-law. The script of this film was written by Upendra Subba, a senior writer and Ram Babu Gurung, a film director
Purano Dunga is the 12th movie in 'Must watch 12 Nepali Movies list'.