Where is Kim Jong Un?

0 0 K.D Sunday, 26 April 2020 Edit this post
In the demilitarization zone that separates North and South Korea, there has been a lot of propaganda in praise of North Korea. That sequence was stopped the previous afternoon. Instead, sad music that sounds like a mourning tune was being played. The life of a great leader was being read. It was the day after November 16, 1986, the day North Korean leader Kim Il Sung died. The news reached the border area only the next day.

According to North Korea-based news agency NK News, the North Korean flag was unfurled in the demilitarized zone. Until the next day, there was confusion in South Korea. What happened in the north? No one was able to provide any authentic information.

The experts had their own arguments and explanations. They were based on conjecture, not facts. Experts' theories added to the confusion. Until November 18, Sung was shown on television in Pyongyang shaking hands with the Mongolian delegation. Kim Il Sung was made more exaggerated and mysterious.

Exactly the same situation has been reported by NK News since Monday night. He says current North Korean leader Kim Jong Un is recovering from surgery. But citing US intelligence agencies, CNN said he was still in danger after the operation. Concerns have spread on social media that he is in a coma due to brain death or he should be treated for Covid-19.

With this rumor, the world's attention has been drawn to North Korea. But in the midst of the Kovid-19 epidemic, it is still a mystery. "We are focused on the real situation in North Korea," said a Seoul-based expert. But it is very difficult to confirm the information. '

Is the North Korean leader dead, alive, in a coma, recovering or in good health? Is still unclear. It will remain unclear until Pyongyang issues an official statement.

April 15 is called 'Sunrise Festival' there. That is her birthday. This day was celebrated with pomp and circumstance. This time on April 15, there were not many such events. However, he was nowhere to be seen.

"It's hard to understand North Korea," said John Deluri, a professor at Yanosi University. Some of the indications can be analyzed, but the results are not what we expected. Officials in both South Korea and China have denied any serious illness.
Kang Min Seok, a spokesman for the South Korean presidency, said: "We are not in a position to comment on the news of the North Korean leader's health." Kim is now 36 years old. She is very fat. He also has some bad habits. He smokes without stopping.

Some have begun to question what would happen if he were really dead. There was a communist regime of the Kim dynasty for 3 generations. His grandfather, Kim Il Sung, founded the People's Republic of Korea. Then his father, Kim Jong Il, ruled for a long time. He is thought to have survived an earlier attempt to oust him following Mr El's death.

If he dies, no mature legacy has been raised in this dynasty. Perhaps there will be a unique power vacuum in North Korea. That could be a time of transition for the new North Korea. But some say that even if their children have grown up, their brothers and sisters can go to power. His sister Kim Yoo-jong is also likely to take power.

At the last stage, the sister was not very active. She herself used to issue press releases on a number of international issues. He used his sister Yola to refute or defend the issues related to South Korea. But there are doubts as to whether women's leadership is acceptable in North Korea. There is no precedent in the history of North Korea for a woman to lead the country.

North Korea is a very bigoted and conservative society. Their ideal leader has the image of a masculine man. It's hard to believe that North Korea would accept female leadership, let alone her sister. So she may be a power practitioner from the inside, but her brother Kim Jong Un is likely to be presented as a leader from the outside.

But the reality now is that no one can guess. For about a week after the death of his father, Kim Jong Il, people had made similar predictions. He was not analyzed to take power. For that, he was considered to be immature.

What would happen if this incident changed North Korean politics? This question does not arise. Some hope that North Korea itself can be dissolved. Korea's unification could happen. Unified Korea will be a great democracy. Don't stop dreaming like this because it is a dream that must be fulfilled one day. But the chances of such a dream coming true right now are slim. 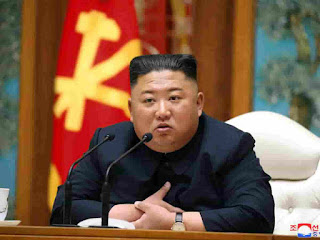