The trailer of the movie 'Lakshmi Bomb' starring Akshay Kumar and Kiara Advani, which is going to be released on digital platform from November 9, has been made public. The role of hero Akshay Kumar will arouse the curiosity of the audience. Kiara has appeared in the movie Hot Avatar. 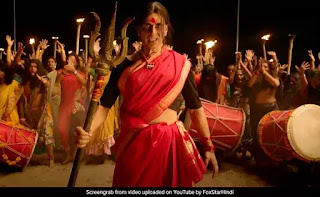 The trailer of the movie, which presents the ghost story in a comedy style, has been made public and the curiosity of the audience has also increased.

Filmed in Dubai and India, the film is the biggest ever to be released on a digital platform. While most of the Bollywood movies released digitally are failing, 'Lakshmi Bomb' is expected to raise hopes.

Corona's work may or may not have taken place, but the work of boredom is certainly visible. A three-and-a-half minute trailer of Akshay Kumar's film 'Laxmi Bomb', which is going to be released next month, exploded on Friday.

Watch 'Lakshmi Bomb' Trailer     It seems like Akshay Kumar has again returned to his 'Bhool Bhulaiya' mode. The trailer is really awesome.

For the past six months, the entire team of director Raghav Lawrence has returned to fill the laughter in a life filled with stress and depression. Although the film is a remake of his hit film 'Muni: Kanchana 2', it is in the trailer of its Hindi version that Akshay Kumar looted the party. Initially, it seems like he is working in a UAE tourism film and has become the brand ambassador of Burj Khalifa, but soon after that the whole case turns around.

Except for one or two films in the early phase of the career, the producers of Hindi cinema have dared to dare to name the Muslim name of Akshay Kumar's character. Here she is called the film's heroine Asif. Asif claims that nothing happens and if he sees a ghost, he will wear bangles. And, what does the ghost look like then, it seems to fit into it.

Watching the trailer after this is a different experience in itself. Even if you have watched its original film, you will not be able to stop yourself from watching 'Lakshmi Bomb'. Watching Akshay Kumar putting a sari on himself in the shop. Then slowly mold the feminine qualities into their performances and finally become Lakshmi, everything is very neatly woven into this trailer.

The film 'Laxmi Bomb' is releasing on 9 November. This trailer of Akshay Kumar was released on the day Prime Video announced the release dates of its films 'Chalang', 'Durgavati' and 'Coolie Number One'. The case may not be a competition in theaters, but OTT is now the next ground, and this is the biggest boast.