5 best korean movies, with english subtitles on youtube (with movie)

0 0 K.D Sunday, 5 April 2020 Edit this post
Korean cinema, which began filming since 1919, had a history of completing 100 years last year. Soon after that, 'Parasite', directed by Korean director Bong Joon Hu, won another major genre award at the Cannes and Oscars. The Oscar-winning Korean movie, which has been subtitled, has spread to audiences worldwide over the past three decades.

Some of Korea's best films, including English subtitles, can be seen on YouTube, making great films on thrillers, love, politics and life philosophy. Here are five recommended films from Korea's representative.

The chirping of birds in the forest reaches the path of hearing voices, Mi Sung Li village. It is known as an abundant village of apple and rice. The people here must reach the city without buying anything. An hour's drive must be reached for this.
This is the village where Song He Won grew up. She could not be satisfied that higher education reached Seoul. She goes back to her hometown because of education, work and relationships. The place is quiet and beautiful, just beyond the city limits. But her house is empty. His mother has no idea. She has many letters from her mother and childhood memories.

He has two childhood friends in the village of Song, who grew up with a single mother. Jae works at the bank and is thinking of never leaving the village. But another friend, Yoon Suk, is a returning character living in the city for some time. He wants to live in the village as a farmer. Attraction towards the city and the village can be felt in these two characters.

Song Hee Won himself is in a dilemma. She does not stay in the village for this movie must be seen. Will Song and his mother meet?

Even if all this is not yet known, the film focuses on the love and friendship of the mother and daughter. After eating a meal, it happens. Like her mother, she has a passion for cooking sweet dishes. The movie is a mouthful of food.
Different colors of the four seasons attract the eye. Cinematography has taken its beauty, whether it be natural fruit or splendid field and bari. Like the life of the character, the film draws the viewer closer to nature.

In the first scene of 'Poetry' the body of a young woman is seen floating in the river. She used to read along with Mizaka's granddaughter in her early 60's. Before the young woman jumped into the river, the diary wrote the names of six boys who were raped, including one of Mija's grandsons.

Though the parents of all the boys have come together and advised to settle the case by compensating the girl's family, Mija is worried about where to raise the five million that is on her part.

Mizah, who is living in another's home, is reportedly hiding her grandson's news with her mother living in another city. Besides, there is another crisis in Mizah's life. She is slowly forgetting names. Alzheimer's disease has been shown to be a memory loss.

Amidst all these crises, Mizamah is in the throes of writing poetry during her old age. She has been involved in poetry learning classes and poetry recitation programs.

As soon as she has a chance to explore the source of poetry in flowers and nature, she asks the wise, 'How to write poetry?'

How does a poem and its life story go together? Could she raise money to save her grandson? Could Mizz write a poem?

If you write, what would be his poem? The film will surely answer these questions.

One of the few films that introduced Bong Joon Hu before he made 'Parasite' is 'Mother'. This 'Murder-Mystery' movie is like 'Surprising' like a parasite. Difficult to find at what time the story changes. I am curious as to what the movie will look like.

There are women who sell herbs and serve unlicensed acupuncture in a village in the southern part of South Korea. She and her 22-year-old son are two June in her family. The son's mental state is sluggish. In the first few scenes of the film, the viewer senses how much the mother's love for her son is hit by the car or feeding her.

One day, the same son was arrested by the police for the murder of a young woman. After this incident, the mother's routine and mental state are disturbed. She is actively searching for the killer to prove that her son is innocent. In this way the story takes an even more interesting turn. Did she succeed in reaching the killer to prove her son innocent?

It's fun to know the answer when watching a movie.

The movie has three main characters - Guru, Chela and Prakriti. There is a connection between character and nature in the film. A lake in the middle of a mountain forest and a dome swimming in the middle of a lake. Director Kim Ki Duk covers the life cycle and natural menstrual cycle of a disciple who grew up with a Buddhist monk in five stages - Spring, Summer, Fruit, Winter and Spring.

Spring is depicted as a disciple's childhood. This child comes to be an age of learning with the Guru which is curious, innocent and even fun. Here is the story of the Summer Disciples. It is a time of storms in every person's life. This time the disciple is attracted to the world outside the dome and is curious. This curiosity also increases the risk of exceeding the circle of monetary values.

As these and subsequent stages are described, they make the film more interesting and mature. Nature or life change is an indispensable rule. This rule seems to have changed the life of the monastery. Director Kim Kim Duk, who has spent years shading every season, has talked a lot about the creation cycle through the monastery. But not the dialogue, through the visual.

She is the director of her portrayal of both violence and spirituality in her films. Kim Ki Duk's 'Spring, Summer, Fruit, Winter, and Spring', which has made dozens of good films, has been viewed by critics as his "masterpiece". YouTube also has a popular documentary titled 'Eriang' with subtitles.

5. Seopyeonje 1993
'Seopyeonje' is director Im Kon Tek's most acclaimed film. Where it is, the film is considered an example of cultural renaissance in Korean history.

Sopionz, also known as Pansori, is a traditional folk music. In this musical tradition of director Im Kon Tek's grown-up side, singing accompanies the drums. It sounds like a blues and it hurts like a blues.

Sopyonje is a film made by a director who feels the crisis of Korean original music because of Japanese colonialism and American dominance.

The film revolves around the main three characters. Yu Bong is a master of singing good pansori His two children are with him. Yu Bong teaches daughter singing and son drums. These three villagers have been working in the bazaar to sustain traditions and livelihoods. In the eyes of society, they are the lower communities whose job it is to serve only.

Although there is no sustainable living base, Father Yu Bong has a ghost rider who makes his offspring a pianist. For this, he does not want to offend or even beat the offspring.

The daughter is wise, but the son is dissatisfied with the father. After being unable to play the drum of abuse, he runs away from his father and his sister one day.

Anxiety is added to the father when his brother fails to sing. What would a father do if he insisted on making the offspring a superior musician?

Even if the brother who loves his sister is angry with his father, will he come back? In the following developments we find the answer.

Music saved? See, the story that preceded it is even more poignant.

Jung Il Sung's cinematography makes the viewer feel that he has seen some of the film's still-still photography.

Along with O Jung Hai's acting and singing role in the role of the sister, the character she plays also takes heart. The film was not only a story of Pansori, it was also a reflection of the collective suffering of the Korean people who had long been in control of external forces. 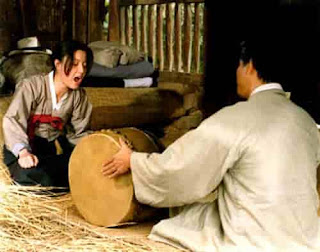